RBN – The Russian Business Network, Now and Then

Observing the Russian Business Network (RBN) this blog is pleased to introduce readers to a highly informative 70 page study of RBN by David Bizeul which you can download in PDF format in English (see links on article footer). 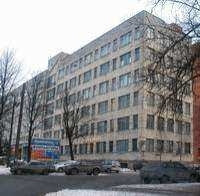 The study provides extensive information and analysis on the background of the RBN; from its probable physical locations (see figure 1 for the RBN offices), Russian cybercrime, and one of the study’s conclusions is very telling, this blog wholeheartedly agrees with and also add international law enforcement.

“There are some countermeasures available but none makes sense for the home user or even companies. Only ISPs, IXPs and Internet regulators can help in mitigating the risks originating from RBN and other malicious groups.”

As with most investigation of RBN, including this blog, we are confined to retrospective analysis, however David’s RBN study is very important, as it provides a definitive image of the RBN just before they reorganized. This is crucial for authors of this blog and other researchers as it provides a comparative base for current analysis and RBN activity. For example within a very early article on this blog we described the Internet serving locations of a number of exploit and Rock phish, landing web sites. This can be seen in Figure 2 (click to enlarge) with the previous and current servers for these domains. 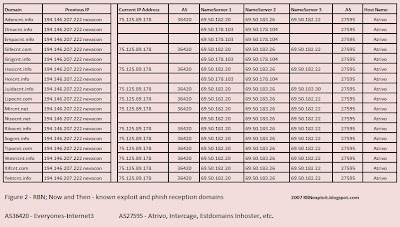 Interestingly AS36420 for the 75.125.89.178 IP address resolves to Everyones-Internet3 – for this and to show connection, this is the same route as shown on Castlecops for Lloyds TSB, Rock Phish (banking ID phishing).

The name servers shown for all in Figure 2, are our good friends, i.e. AS 27595 i.e. Atrivo, Intercage, Inhoster, Estdomains. With even more interest is the same name-server also hosts the following “fakes”.

We hope this provides further examples of the RBN’s current well being, also to add we are pleased to announce in collaboration with David Bizeul we will provide an update for this RBN study, within the next few weeks. 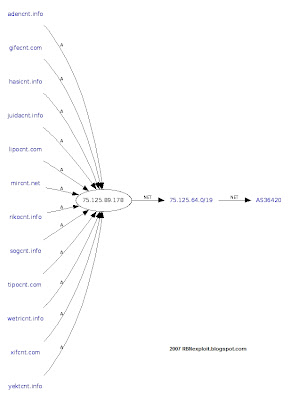