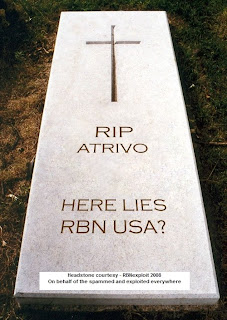 As from today the Internet is a little safer, as Atrivo goes dark.


It is pleasing to report the last remaining peer routing Atrivo (AS 27595 Atrivo/ Intercage), ‘Pacific Internet Exchange’ (PIE) see Spamhaus ref below, was withdrawn at 2:35am EST Sunday Sept 21st 2008.


This is an excellent example of community effort involving a wide cross section of anti-spammers, malware and botnet researchers, journalists, and Internet network operators.


Although this is good news we should not relax too much, some of the bad stuff has migrated elsewhere, similar to the self re-distribution of AS40989 RBN Network last year. However, we look forward to the forthcoming ‘Atrivo – Cyber Crime USA’ report version 2.0 from HostExploit which may cast some light on this re-distribution and other bad actors.

Magnanimous in victory we should give the last word to the vanquished as Emil Kacperski long time spokesman and apologist for Atrivo / Intercage said,

“I just put my fate into companies I shouldn't have.”

For the record the CIDR report - RIP 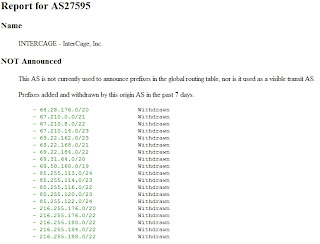