Hosting UA in Odessa one of the main data centers and hosts in Ukraine is offline, due to a major fire.

AS41665 HOSTING-AS National Hosting Provider, UAwith 144,384 IP addresses and was # 4 on the HostExploit Bad Hosts Report in December 2009 out of 34,000 ASNs (autonomous servers / hosts) compared for serving badness on the Internet. Although in the forthcoming HostExploit Top Bad Host report – Hosting Ua had demonstrated some improvement over the first quarter 2010, see forthcomingHostExploit Bad Host Report March 2010.

The fire that occurred on the second floor Business Center Factory of Business St. Dal'nic'ka 46, Odessa occurred at around 10:00 pm local time on the evening on March 27th 2010. (http://watcher.com.ua). At this time there has not been any official explanation as to the cause of the fire.

Figure3 - shows currently Hosting UA disconnected from the Internet. Of the 5,381 web sites tested on this network over the past 90 days, 291 of the web sites served content that resulted in malicious software being downloaded and installed. 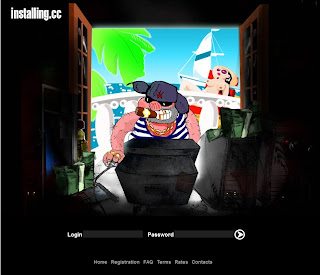 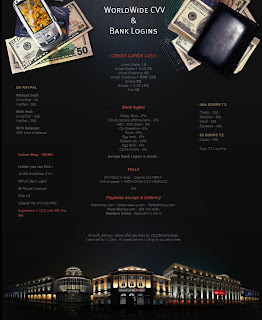 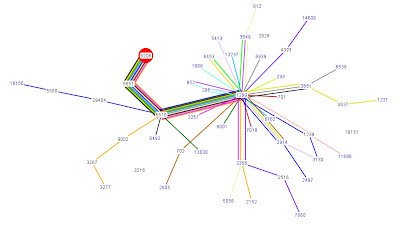 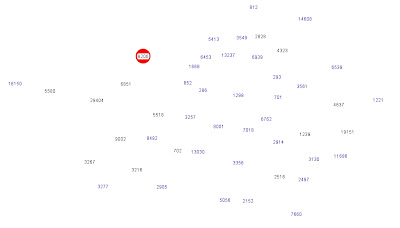 RBN (Russian Business Network) in the USA takes another hit, and another victory in the war against Internet badness.

‘Alas poor McColo I knew them well’ - so does anyone on the planet who receives email / spam.

The study published by HostExploit.com was based on tracking and documenting the ongoing cyber criminal activity of McColo and others. Get the report here. HostExploit Report

As a result of the first HostExploit Cyber Crime USA report which focused on Atrivo / Intercage and subsequent community actions, there was a quantitative drop of 10% of spam and malware worldwide. While temporary, it does clearly demonstrate that with a concerted and consistent effort by concerned commercial Internet network operators, a safer Internet can ensue.


Following Hurricane Electric's awareness of the report's content, at approximately 4:30pm EST 11/11/08 Hurricane Electric pulled the plug. Just to check on this see the chart from SpamCop below. Yes a huge drop in spam as just one example! 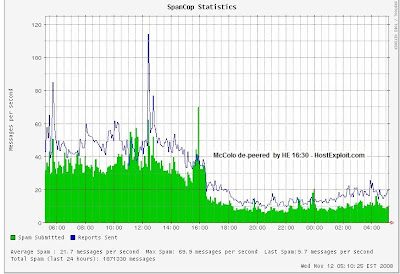 SpamCop Charts live here
Of course not over yet -

Also as we see on the CIDR report AS26780 MCCOLO - McColo Corporation is still peered by AS3549 GBLX Global Crossing Ltd.


However, we can assume Hurricane Electric will get around to this 64.62.128.0/18 net block and GBLX is also acting in unison.

Again this is an excellent example of a growing community effort, involving a wide cross section of anti-spammers, malware and botnet researchers, journalists, and Internet network operators. When considering the ongoing war for the heart and soul of the Internet; “Not the end not the beginning of the end, but the end of the beginning”? 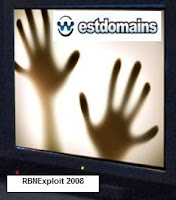 Many have shown Estdomains et. al., as a source of domain registration badness and used by cyber criminals for many years. As recently described within the HostExploit.com report “Atrivo - Cyber Crime USA” Sunbelt Software , Spamhaus, to name a few, and followed up by The Washington Post by Brian Krebs “A Superlative Scam and Spam Site Registrar”

Ironically EstDomains has been trying to fight back with press releases such as “EstDomains, Inc Takes Next Step in Combating Spam and Malware” with them stating; “Once again EstDomains, Inc would like to address the interactive community and ask for co-operation to make the Internet clear and safe.”


However, even more relevant to the demise of EstDomains was the later Brian Krebs post “A Sordid History and a Storied CEO” relating to the EstDomains CEO Vladimir Tsastsin

As of today ICANN has issued a formal and we assume irrevocable, notice of termination – see fig 2 below: 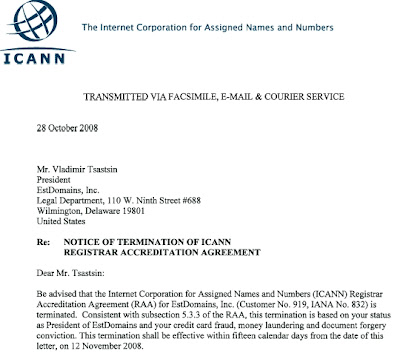 The formal letter of termination is available for download from ICANN