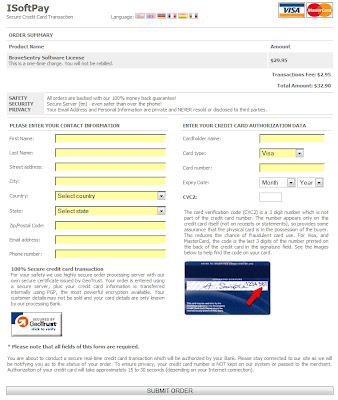 In an extension to analysis of the Russian Business Network (RBN) this is the first element of a series on RBN payment systems.


This article focuses on just one of the several payment systems for its “fakes” retail division i.e. isoftpay.com, this has been reported before namely the Sunbelt Blog (see links on footer) Oct 3rd 06 in the report on the rogue software, also more recently reported within 2-spyware on Dec 10th 07.


In exploring this node of the RBN’s organization it raises several areas of interest; the location(s) of internet operation, SSL and transactional base. Briefly by way of an introduction to later more in depth analysis malware revenue models, analysis solely of isoftpay does provide a starting point for some generalized assumptions of RBN retail revenue. Therefore as mentioned within earlier articles here on fakes and current analysis:

(a) Isoftpay serves as the payment point for such fakes as Bravesentry, and others.


(c) This tends to demonstrate approximately 25% of the unique visitors to those rogue software web sites go back to the payment site. As directed by the exploits downloaded from the “free” trial of the fake anti-spyware.


(d) On a reasonable assumption a high proportion of those directly visiting the secure payment area after downloading the exploit to make the purchase, say 75%, this would provide gross revenue of say $4 million per month from solely US visitors.


(e) As US visitors represent 17 – 40% of the world wide audience for such sites one can assume gross revenue as being in the region of $10 million / month, $120 million per annum. 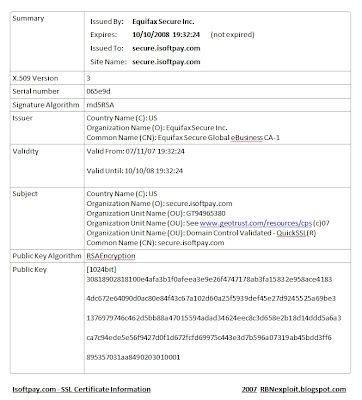 A significant component is the SSL (Secure Sockets Layer) and certification the figure below shows the current certificate for Isoftpay.

The certificate appears legitimate unfortunately we have not as yet ascertained from Equifax or Geotrust whether it is a forgery, and if not, they should be able to inform us who the purchaser was.

Also of interest is the payment transactions and as site takes Visa and MasterCard, and further enquiries are outstanding as to who the revenues collected are paid to.

Finally as several victims have contacted the authors of this blog, and any transaction is fraudulent. No doubt Equifax, Geotrust, Visa and MasterCard will act swiftly to prevent further fraudulent transactions and ensure victims at least gain a return of their payments?

From the perspective of the RBN’s nodes of operation originally as noted by Sunbelt the IP address in Oct 06 was 69.50.168.101 - AS27595 ATRIVO. The figure below shows the current (Dec 19th 07) and a comparison with locations on Oct 28th 07, the actual only difference is the addition of name server (ns3.isoftpay.com) served from AS4837 CNC Group China. The other servers are some of the RBN’s usual suspects AS9930 TTnet Malaysia, AS4657 StarHub Singapore, and it goes without saying AS27595 Atrivo AKA Intercage, Inhoster, etc. 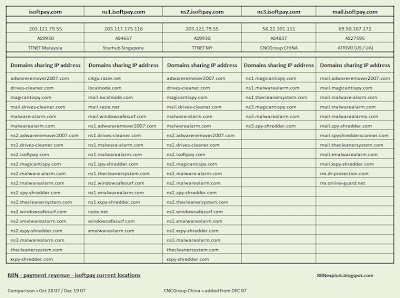 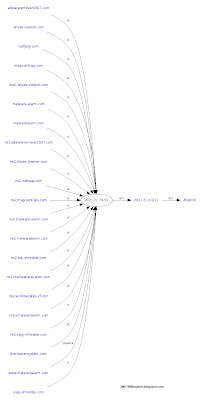