As requested by community relay, the following is a report on the cyber war underway in parallel with conventional warfare. Many of Georgia’s internet servers were under external control from late Thursday, Russia’s invasion of Georgia commenced on Friday. It is further requested of any blog reader the information below is further relayed to the International Press and Community to ensure awareness of this situation. Also as much of Georgia’s cyberspace is now under unauthorized external control the following official press statement is circulated without modification. Report on the cyberwar below:
Official Press Statement from the Government of Georgia The Government of Georgia has sought to defuse the tense and violent situation in the South Ossetia region yesterday by declaring a unilateral ceasefire and appealing to the leadership of the separatist rebels to begin talks with the State Minister for Reintegration Temuri Yakobashvili. Despite calls for peace, separatist rebels continued to attack Georgian police posts and the civilian population.


In response to separatist attacks on government-controlled villages, Georgian Armed Forces occupied several villages in South Ossetia early this morning. At around 5:30am, Russian Federation forces began moving into the conflict zone through the Roki tunnel, which connects Russia and Georgia and has been an entry point for the illegal transfer and sale of arms to separatist rebels. Two additional Russian units entered into Georgia through the Roki tunnel around 8:00am. The first Russian unit that entered Georgia through the Roki tunnel was killed as they attempted to cross the Gufta Bridge, which was also destroyed in the operation conducted by the government’s air command.

In an effort to protect the civilian population, the President of Georgia Mikhail Saakashvili declared a unilateral ceasefire to be in effective between 3:00pm – 6:00pm Friday. During this time, the civilian population and the separatists were invited to cross the line of control. The government has also provided humanitarian assistance and full amnesty for those separatists that choose to surrender. As of 2:30pm, Georgian forces controlled 100% of Tskhinvali with just a few small groups still resisting government presence. Despite the ceasefire, Russia continued to take aggressive military action within Georgian territory.

At 4:30pm and 5:35pm, Russian military aircraft bombed a Georgian military base in Marneuli three times, in the southern part of the country about 30 kilometres from Tbilisi, resulting in the destruction of grounded Georgian military equipment, severe damage to a number of buildings, and several causalities.


Russian military aircraft also entered Georgian airspace at 3:05pm and dropped two bombs on the Georgian military airbase in Vaziani, just on the outskirts of the capital.

For confirmation and current status of the cyberwar: 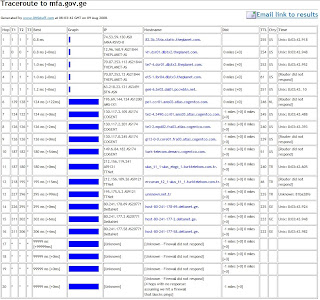 (b) From Ukraine - Ge = available & slow; note; cached (forged page),now only via redirect through Bryansk Ru 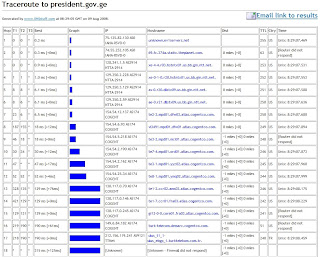 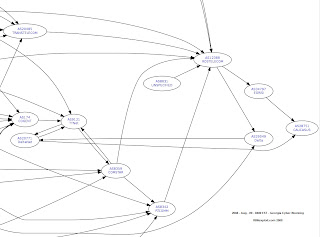 It should be noted servers; AS8342 RTCOMM (Ru), AS12389 ROSTELECOM (Ru), AS9121 TTNet Autonomous System Turk Telekom (Tk) are well known to be under the control of RBN and influenced by the Russian Government. All efforts are being made to regain server control, and International assistance is requested to provide added Internet routing via neutral cyber space.